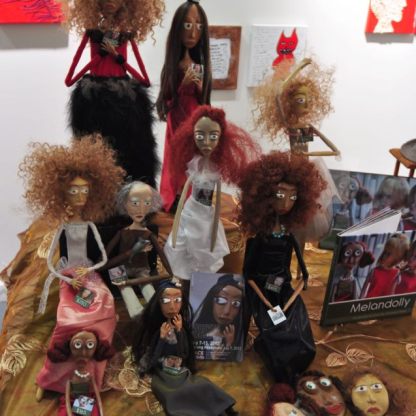 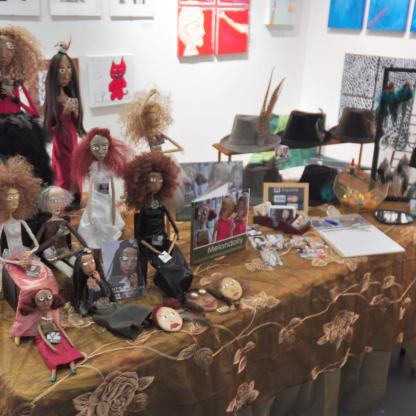 I had prepared for the 8th for about two months, and it has come and gone. I had two shows scheduled, one at a gallery which I just needed to show up to and the other at the Harlem doll and gift show where I had to man a table for six hours. I have never done a craft show, so I really didn’t have a clue on how to prepare. All I knew was that I was going to be given a table and that I needed to put stuff on it, which I didn’t have much of. Since I don’t make dolls as frequently as I should, I had quite a few sleepless nights leading up to that day.  I didn’t make as many dolls as I wanted to, so I decided to focus on decorating my table with promotional items and other crafts like earrings and hats. Getting there was a nightmare, public transportation is the worst. I took the bus all the way to the train station only to find out that my train wasn’t going downtown, so I took a different train only to get out and catch a cab. This left me all of 15 minutes to set up my table. I just wanted to crawl into a corner, hold myself and cry. In a frenzy, I pulled it off and was pretty happy with the outcome. I met quite a few interesting people there, one in particular stood out to me which I had the pleasure to be stationed next to for the whole day. Her name was Shirley Nigro, and she had a massive collection of dolls. They were all handmade by her and each one was unique in its own way. They ranged in sizes, styles and expressions. She had to have over two hundred dolls with her, which made my table of twelve look like left overs. By five thirty, I had to start packing so that I could make it to the other show which started at seven, in Brooklyn. The craft show was all the way in Harlem and I still needed to drop my things off at home. Needless to say, I was late to the opening. When I got there, I was surprised to see to see a handful of friends, some old and some new. I even got a chance to speak to some of the other artists that I’ve shown with in the previous year’s show there. Last year the gallery took one doll for the show but this time they accepted three. So exciting! Overall it was a great day, famished, and exhausted as I was. Would I double book again? Maybe if  I get a car 🙂