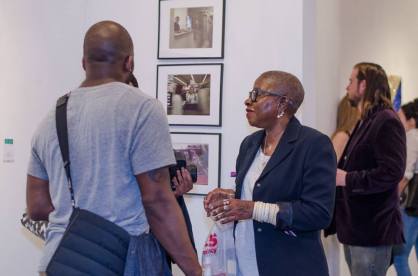 I had my first show in Chelsea, and it was actually for my video coverage and photos that I took during the Black Lives Matter protests. I was tired of hearing the rhetoric on the news and from people who have never dealt with police racially profiling them, so I decided to show the side of the demonstrations that the news wouldn’t cover; peace, love, art and positive thinking. Every time you would turn on the news at the time, you would see that same damn CVS on fire in Baltimore, and the coverage made it seem as if everyone were angry rioters and looters. That one incident shaped the whole narrative for people rightfully protesting police brutality, and it made people believe that everyone demonstrating had bad intentions. With my video, I showed many of the positive and uplifting speeches that was given, the locations of demonstrations and the creative and beautiful signs that people made for the protests.